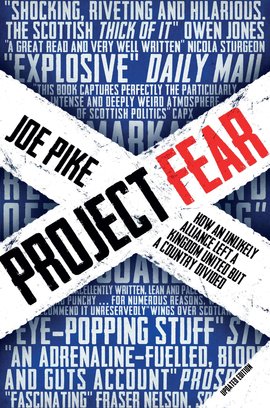 When Scotland voted no to independence, it was hailed as a victory for the unique Better Together alliance, a triumph of cross-party collaboration, a coup for Westminster.

But the unionist relief proved to be premature.

In this compelling insider account, Joe Pike goes behind the battle lines to uncover the secrets of the much-maligned No campaign, dubbed ‘Project Fear’. Drawing on exclusive interviews with over sixty sources at the heart of the action, he reveals the tears, the tantrums and the tactical failings that saw a double-digit poll lead reduced to a nail-biting finale, with victory eventually coming at a catastrophic cost to the Labour Party.

Now, as the future of the union looks as uncertain as ever, this new, updated edition explores the striking parallels between the Scottish and EU referendums, and asks: where now for Scotland in the wake of a political landslide?

"Shocking, riveting and hilarious. The Scottish Thick of It."

"Excellently written, lean and pacey and punchy … For numerous reasons, we recommend it unreservedly."

Takeover
Alex Salmond: My Part In His Downfall
Europe In or Out
Why the Tories Won