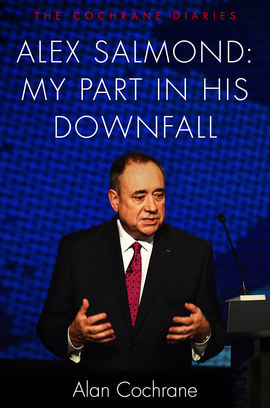 Alex Salmond: My Part In His Downfall The Cochrane Diaries

Alan Cochrane – or ‘that ghastly man from the Telegraph’, as Alex Salmond’s wife calls him – emerged as a Unionist hero in Scotland’s recent independence battle.Using his daily newspaper column and his enviable list of Westminster and Scottish contacts, the veteran journalist mounted a personal mission to ensure the survival of the United Kingdom and the downfall of Alex Salmond’s Scottish nationalist cause.

At the same time, Cochrane was secretly keeping a diary charting every twist and turn in the campaign, from Westminster’s decision on whether to allow the ballot to go ahead to Gordon Brown’s late entry onto the scene as tensions mounted in the No camp. Through the pages of this illuminating journal, Cochrane reveals the truth about how the UK was won, offering biting analysis, telling detail and often trenchant wit.

As the polls narrowed in the run-up to 18 September, the historic fight for Britain brought out the best and the worst in the characters involved. With his behind-the-scenes access to David Cameron, Alistair Darling, Gordon Brown and everyone in between, Alan Cochrane raises the curtain on the panicked, incompetent and cynical world of modern politics, sparing no one from his acerbic tongue.

A delightful, funny and insightful diary of the two-year Scottish referendum.