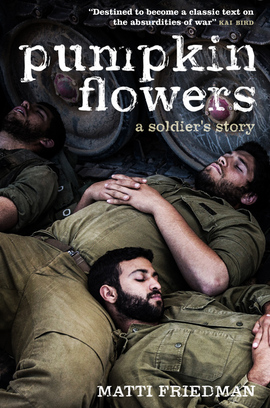 It was just one remote hilltop in an unnamed war in the late 1990s, but it would send out ripples that are still felt today, foreshadowing the chaos of 21stcentury conflicts in the Middle East. The hill, in Lebanon, was called the Pumpkin; ‘flowers’ was the military code word for casualties.

Part memoir, part reportage and part haunting elegy for lost youth, award-winning writer Matti Friedman’s powerful account follows the band of young soldiers – the author among them – conscripted out of high school into holding this remote outpost, and explores how the task would change them forever.

Pumpkinflowers is a lyrical yet devastating insight into the day-to-day realities of war, and a powerful coming-of-age narrative. Raw and beautifully rendered, this essential chronicle casts an unflinching look at the nature of modern warfare, in which there is never a clear victor and innocence is not all that is lost.

“Pumpkinflowers is a sad, lyrical book—proud and fierce on its own terms. Friedman’s prose is elegant and concise, yet it is studded with gems from the Talmud and Torah that only a writer deeply learned in the Jewish tradition could offer. His memoirs of his time in the mist and the mountains of Lebanon are full of haunting insights into what it means to be a soldier. It will be remembered as a classic.”

“In Pumpkinflowers, Matti Friedman has created one of the most original and powerful works of non-fiction I have ever read. […] Friedman creates a mythic yet intimate work that distils what Wilfred Owen called “the pity of war” with a visceral and unforgettable intensity.”

“Matti Friedman’s haunting war memoir reminds one of Michael Herr’s unforgettable Vietnam memoir, Dispatches. It, too, is destined to become a classic text on the absurdities of war. Evocative, emotionally wrenching, and yet clear-eyed and dispassionate, Pumpkinflowers is a stunning achievement.”

“Riveting. Pumpkinflowers is both an historical jigsaw puzzle and an examination of Israel’s fraught national identity.”

Siobhan Fallon, author of You Know Where the Men Are Gone

“A haunting yet wry tale of young people at war, cursed by political forces beyond their control, that can stand alongside the best narrative nonfiction coming out of Afghanistan and Iraq.”

“The collective portrait [of young Israeli soldiers] puts Pumpkinflowers on a par with Tim O’Brien’s The Things They Carried – its Israeli analog.”

“A book about young men transformed by war, written by a veteran whose dazzling literary gifts gripped my attention from the first page to the last.”

“The power of the telling of this important tale is in Friedman’s restraint, […] unadorned by ego or excess rhetoric […], that can leave the reader feeling punched in the gut.”

“Matti Friedman’s recently published Pumpkinflowers: An Israeli Soldier’s Story should be well on its way to joining the select group of wartime narratives that continue to grip and grate on the conscience long after they have been read, put back on the shelf, or passed along. […] Pumpkinflowers is both searing and sobering. Friedman tugs at our feelings about nobility, absurdity, and tragedy by capturing mood and melancholy with the spare sketches of a gifted wartime correspondent.”