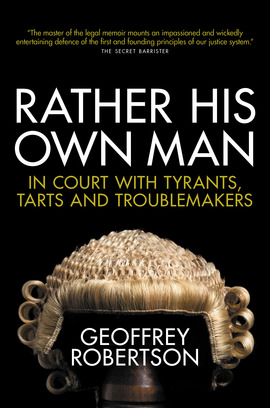 Rather His Own Man In Court with Tyrants, Tarts and Troublemakers

Geoffrey Robertson led students in the ’60s to demand an end to racism and censorship. He went on to become a top human rights advocate, saving the lives of many death-row inmates, freeing dissidents and taking on tyrants in a career marked by courage, determination and a fierce independence.

In this witty, honest and sometimes irreverent memoir, he recalls battles on behalf of George Harrison and Julian Assange, Salman Rushdie and Václav Havel, Mike Tyson and the Sex Pistols, and battles against General Pinochet, Lee Kuan Yew and Mrs Thatcher (the true story of Spycatcher is told for the first time).

Interspersed with these forensic fireworks is the story of a pimply schoolboy from a state comprehensive, inspired by a banned book to become a barrister at the Old Bailey and who went on to found the UK’s leading human rights practice (Doughty Street Chambers) and to defend troublemakers throughout the world.

Rather His Own Man captures the drama of the trial, the thrill of victory and the feeling of ‘courtus interruptus’ when a big case settles. Its cast of characters includes Princess Diana, Pee-Wee Herman, Dame Edna, the Queen and Rupert – the bear and the media mogul. It’s a read that is both exhilarating and erudite – and very funny.

If Robin Hood, King Arthur, St George, Florence Nightingale and Oscar Wilde were compressed into one witty, brilliant and compassionate lawyer they still wouldn’t come close to approximating that heroic champion of our laws and liberties that is the great Geoffrey Robertson. What a life and how crackingly well told. When a heart-stoppingly unputdownable comedy thriller turns out to be a truthful account of a real life, you know you’re onto a winner.

Before I read Geoffrey’s brilliant book, I thought a barrister was a guy who made expensive coffee. I’m much wiser now.

An amazing life, with gripping expositions of his milestone cases in human rights.

The master of the legal memoir mounts an impassioned and wickedly entertaining defence of the first and founding principles of our justice system. The success of Rather His Own Man rests in its raw honesty and unrestrained decency; a vital and timely reminder of the meaning and value of our human rights, and how fortunate we are to have lifetimes such as that of Geoffrey Robertson QC devoted to their defence.

Geoffrey Robertson is iconic in the law. Fierce in the pursuit of justice, fearless in protecting the rule of law, and utterly independent. A legal colossus!

Legal memoirs are rarely memorable. Rather His Own Man: In Court with Tyrants, Tarts and Troublemakers is a rare exception, a legal autobiography that entertains, informs and inspires.

Rather His Own Man is thoroughly entertaining. Robertson is an epic raconteur and name-dropper, revelling in his own dinner parties (“the ultimate north London gathering”) no less than invitations to the Palace. It’s a book that might persuade a young person that the law need not be a dull profession.

Riveting. [Robertson]’s contemporaries at the bar will read these memoirs with envy; others with almost as much enjoyment as his eminent entourage attests to on the dustjacket.

Robertson's tales of the legal vexations of the great and at times not very good are candid, irreverent and amusing.

A rollicking read, with some laugh-out-loud lines […] a useful primer to some of the great legal arguments of our age.

‘Best books for summer’: If you are seeking inspiration, look no farther Rather His Own Man […]  provocative, witty, engaging and at times laugh-out-loud funny. His tone slickly transits from gossip splashed around his celebrity pool to full battle cry. Kick back and enjoy the ride.

Fascinating and eventful: a fascinating glimpse into our once admired legal system, now rapidly falling apart like so much else in pot-holed communities across the country. And yet there is real inspiration in the saga of the young man from Sydney with the gift of the gab and iron principles too, a model for those seeking the law as a career.

One of the world’s most famous human-rights lawyers showcases his immense talents with typical gravitas, grandstanding and gossipy insight.