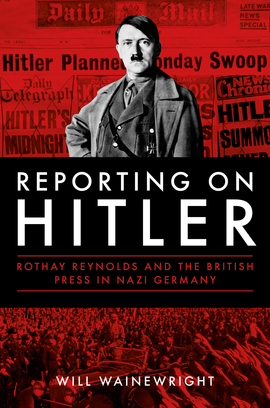 Allegedly the only man capable of holding the Führer’s intense gaze, Rothay Reynolds was a leading foreign correspondent between the wars and ran the Daily Mail ’s bureau in Berlin throughout the 1920s and 1930s. The enigmatic former clergyman was one of the first journalists to interview Adolf Hitler, meeting the future Führer days before the Munich Putsch.

While the awful realities of the Third Reich were becoming apparent on the ground in Germany, in Britain the Daily Mail continued to support the Nazi regime. Reynolds’s time as a foreign correspondent in Nazi Germany provides some startling insights into the muzzling of the international press prior to the Second World War, as journalists walked uneasy tightropes between their employers’ politics and their own journalistic integrity. As war approached, the stakes – and the threats from the Gestapo – rose dramatically.

Reporting on Hitler reveals the gripping story of Rothay Reynolds and the intrepid foreign correspondents who reported on some of the twentieth century’s most momentous events in the face of sinister propaganda, brazen censorship and the threat of expulsion – or worse – if they didn’t toe the Nazis’ line. It uncovers the bravery of the forgotten heroes from a golden age of British journalism, who risked everything to tell the world the truth.

“Will Wainewright tells Rothay Reynolds’ story in this fascinating book, a short study in conscience denied. […]The author has dug deep in The Times’s archives and come up with some blistering reports.”

“What appears on the face of it to be a life of Rothay Reynolds, the Daily Mail’s Berlin correspondent between the wars, turns out to be a fascinating group portrait of the British press corps during the Third Reich. It is a compelling study.”

"Splendid read, recommended. When newspapers mattered... and how they (mostly) got it terribly wrong."

"Reporting on Hitler should be a must read for every NUJ member who is interested in responsible reporting of big foreign policy issues."

The Journalist (magazine of the National Union of Journalists)