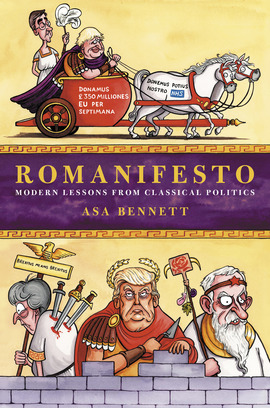 Despite the last days of Rome being around 1,500 years ago, the shadow of its empire – and what those who lived in it had to say – still looms large over modern politics.

Indeed, we would not think of ‘politics’ as it is without our Classical ancestors. The word comes directly from the ancient Greek word polis, which refers to a city or state. Someone who had to take charge came to be known as a politikos. The Roman political scene was fuelled by ambition, ego and self-interest. People sought to get ahead by striking backroom deals or shaky alliances that would soon fall apart. Politicians were happy to stab each other in the back – and the front for that matter – if necessary.

Politics may be less bloody these days, but in many ways things are still the same. In our rush to keep on top of events, it is worth looking back to the Romans to understand what is going on.

This book delves into these similarities to examine what today’s politicos can learn from their Roman predecessors. How did they climb the greasy pole? How did they handle the rough and tumble? What can Boudicca teach us about Brexit? What could Emperor Hadrian teach President Trump about walls?

No longer should the answers to questions like these be the monopoly of those who happened to study Classics at university, such as Boris Johnson. It’s time this ancient wisdom was democratised. So read on to find out how to do politics as the Romans did.

“Asa Bennett’s delightful book reminds us that though the Romans may have left our shores in 410 AD, they never left our hearts and minds. They are with us today in more or less everything we think or speak or do. And nowhere more so than in the sphere of politics. Tremendous fun!"

“A sharp, smart and frighteningly familiar portrait of political power. If you think our politicians are bad, wait until you meet the Romans in Bennett’s lively guide.”

Daisy Dunn, classicist and author of Of Gods and Men: 100 Stories from Ancient Greece and Rome

“Part entertaining-but-erudite romp through the political shenanigans of ancient Rome, part well-informed take-down of those who vie with each other to rule over us today, Asa Bennett’s book draws a whole host of parallels between the ancient and the modern that are both insightful and instructive. Hugely enjoyable.”

“A witty and learned tour through the hall of mirrors that Roman history provides us in the age of Brexit and Boris.”

Tom Holland, author of Dynasty: The Rise and Fall of the House of Caesar

“In unpretentious prose our contemporary politicians are measured against the unscrupulous leaders of the ancient world and found morally to be even worse. There are arresting reminders of just how low the bar is now, with shameful deeds excused by the removal of shame from the equation altogether. Contemporary politicians who fancy themselves as classically inspired orators would do well to read this hugely entertaining and lively book. Asa Bennett has your number.”

Ian Martin, writer for The Thick of It and The Death of Stalin

“Troublesome Britons rebelling against self-important pan-European rulers. Radical career politicians invoking the many against the few. Bosom allies turning on one another, daggers drawn, to grab the top job. Asa Bennett’s incisive and amusing odyssey through classical politics reminds us that the ancient world is a lot closer than we might imagine.”

‘Engaging and written with verve.’

"This wonderful book looks at the classics from Ancient Rome and Athens and translates their lessons into modern day politics. It's also very funny. A great stocking filler if ever there was one."

Romanifesto is "the perfect blend of current affairs and history".