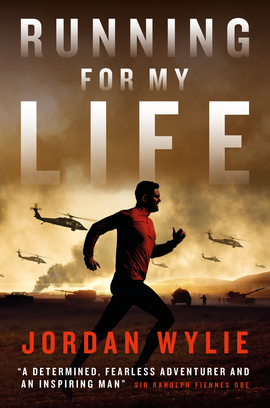 Running For My Life

This is the extraordinary true story of how a former British soldier turned extreme adventurer set out to run marathons in the world’s most dangerous countries. In 2018, Jordan Wylie trained and ran in Somalia, Iraq and Afghanistan to raise awareness of the plight of children suffering in war zones as well as the funds to help provide education.

Risking his life in some of the most hostile places in the world, Wylie defies suicide bombers, official advice, dehydration and exhaustion, as well as his own mental and physical health issues in an incredible tale of endurance and tenacity against the odds.

His first race, in Somalia, is moved to Somaliland after a suicide bomber kills 600 people. Running the Baghdad half-marathon brings back painful memories of friends and colleagues he lost when he served there. Finally, at the Afghanistan marathon, he provides a high-profile target for the Taliban, who murder seventeen people the day before he arrives.

What makes these three runs even more challenging is the fact that Jordan is affected not just by mental health issues from his own experiences, but also with epilepsy. Alongside the more extreme obstacles, Jordan has to overcome self-doubt – and the doubt of others – to show what can be achieved with belief and fortitude.

An honest, raw and compelling account of an incredible adventure by an extraordinary man.

A determined, fearless adventurer and an inspiring man.

An inspiring read of courage, determination and passion to help others. Jordan takes us on an incredible journey to places most people will never see, while also facing his own mental health struggles head on.

The inspiring story of a man on the edge who faced up to and conquered his demons in order to help himself and others build a better life. One step at a time.