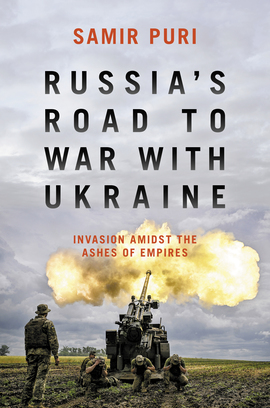 When Vladimir Putin invaded Ukraine on 24 February 2022, many in the West were left stunned at his act of brutal imperialism. To those who had been paying attention, however, the warning signs of the bloodshed and slaughter to come had been there for years.

Tracing the relationship between the two countries from the breakup of the Soviet Union in 1991 to Putin’s invasion in 2022, what emerges from this gripping and accessible book is a portrait of a nation caught in a geopolitical tug of war between Russia and the West. While Russia is identified as the sole aggressor, we see how Western bodies such as the EU and NATO unrealistically raised Ukraine’s expectations of membership before dashing them, leaving Ukraine without formal allies and fatally exposed to Russian aggression.

As a former international observer, Samir Puri was present for several of the major events covered in this book. He uses this experience to ask honestly: how did we get here? Why does Vladimir Putin view Ukraine as the natural property of Russia? Did the West handle its dealings with these countries prudently? Or did it inflame the tensions left amidst the ruins of the Soviet Union? Were there any missed opportunities to avert the war? And how might this conflict end?

“Russia’s catastrophic invasion of Ukraine poses weighty questions to the West: not only about the causes of war but about the eternal questions of causes and responsibility, structure and agency. Samir Puri enters this discussion with both passion and care. He draws on his own experience of the region and a deep study of Western–Russian relations over decades. As a result, he offers an account that is layered in its argument, with an eye to the war’s roots in both human vice and tragic delusion. We don’t yet know where the current battle is headed. But Puri’s ‘first cut’ will help us greatly in fathoming how we got here.”

Samir Puri’s Russia’s Road to War with Ukraine is a ground-breaking study of the imperialist hubris behind Russia’s war of aggression against Ukraine. The author has masterfully interwoven the historical legacy of the Soviet Leninist regime and its post-Soviet heirs. It is also an excellent account of the role of political leadership in times of war. The book is a must-read for students of International Relations and eastern European affairs.