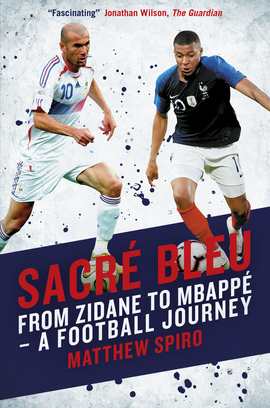 Remember when Zinédine Zidane lifted the World Cup in 1998? Kylian Mbappé doesn’t. The forward wasn’t born when the French team first became world champions. But it was Mbappé’s unique talent that helped France reach the summit of world football once again in 2018, erasing years of failure, rancour and shame.

For Les Bleus, the road between these two highs was blighted by bitterly painful lows. Zidane’s headbutt; a players’ strike; infighting and recriminations; even sex scandals and blackmail. Mbappé witnessed it all as he honed his prodigious talent in the banlieues of Paris, and his story embodies France’s journey from disaster to triumph.

In Sacré Bleu, Matthew Spiro traces the rise, fall and rise again of Les Bleus through the lens of Kylian Mbappé. Featuring a foreword by Arsène Wenger and interviews with leading figures in French football, Spiro asks what went wrong for France and what, ultimately, went right.

“Winning the World Cup in 1998 was the highlight of my career. In this brilliant book, Matt Spiro captures the significance of that event and explains how it changed football in France for ever.”

“When I lived in France in the early 1990s I am not sure that I would have predicted the effect that the country would have not only on UK football, but on global football. Certainly, when they made such a mess of qualifying for the 1994 World Cup, winning the next one seemed a long way off. Having worked with Matt many times, it is no surprise that he has perfectly captured the essence of this beautiful country and its beautiful game.”

“During my six seasons in France I saw the way Les Bleus brought an entire nation together. When they won the World Cup in 1998, I was kissing my teammates at pre-season training, thinking I was French. This fantastic book brings back some wonderful, vivid memories and truly encapsulates the complex relationship France has with football.”

“Glory, influence and the sheer volume of talent are clear themes of French football over the past twenty-five years. Matt Spiro goes deeper and covers the complications of culture and race, too. This is a book about modern France as well as modern French football.”

“A detailed and sensitive account of France’s turbulent journey from one World Cup triumph to another; a fascinating story of football but also of far wider issues.”

"An amazing tale... Spiro skilfully traces the emergence of world-class players from city ghettos imbued with strife through a volcanic mix of inhabitants from former French colonies."

"A brilliantly insightful and entertaining read."

Get It On
Kicking Back
Thomas Tuchel
Blood and Circuses