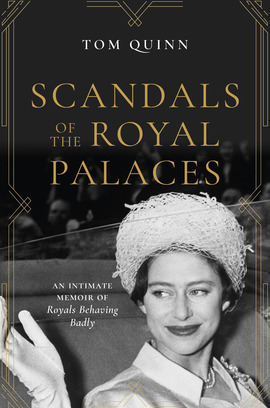 George Orwell once said that the British love a really good murder. He might have added that the only thing the British love more than a good murder is a really good scandal, and best of all are the sexual and political scandals that take place behind the gilded doors of Britain’s royal palaces. From Edward II’s intimate relationship with Piers Gaveston to Prince Harry and Meghan Markle’s dramatic exit from the royal family, the royal residences have seen it all.

This glorious romp of a book contains new information on well-known and not-so-well-known scandals, including those that have only recently been revealed through the release of previously secret official papers. Exploring surviving palaces such as Kensington as well as long-vanished residences including Whitehall, Scandals of the Royal Palaces is the first in-depth look at the bad behaviour of not just the royals themselves but also palace officials, courtiers, household servants and hangers-on.

Delving into the bitter hatreds that generations of King Georges nursed for their eldest sons, Queen Victoria’s opium-fuelled rages and Edward VII’s near-miss perjury conviction, royal expert Tom Quinn reveals that scandal and the royal family have always been bedfellows. And if the behaviour of today’s royals is anything to go by, the glittering palaces will continue to house intriguing, embarrassing and outrageous scandals for centuries to come.