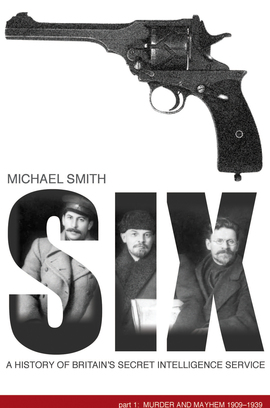 Paperback edition of the first part of acclaimed author Mick Smith’s epic, completely unauthorised history of Britain’s external intelligence community, Six tells the complete story of the service’s birth and early years, including the tragic, untold tale of what happened to Britain’s extensive networks in Soviet Russia between the wars. It reveals for the first time how the playwright and MI6 agent Harley Granville Barker bribed the Daily News to keep Arthur Ransome in Russia, and the real reason Paul Dukes returned there. It shows development of tradecraft and the great personal risk officers and their agents took, far from home and unprotected. In Salonika, for example, Lieutenant Norman Dewhurst realised it was time to leave when he opened his door to find one of his agents hanging, dismembered, in a sack.

‘Engrossing… As a rollicking chronicle of demented derringdo, Smith s book is hard to beat. His research is prodigious and his eye for a good story impeccable, and his book, while perfectly scholarly, often reads like a real-life James Bond thriller’. – Dominic Sandbrook, Sunday Times

‘Finely detailed and scrupulously researched. A tour de force in the exploitation of the available open sources, not only from the National Archives, but a comprehensive interrogation of personal papers held in various other archives plus a thoroughgoing re-examination of the published narratives in the light of these additional sources.’ – Philip H Davies, Intelligence and National Security