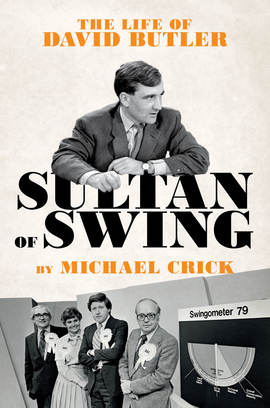 Sultan of Swing The Life of David Butler

Sir David Butler pioneered the science of elections, transforming the way we analyse election results. In 1945, aged only twenty, Butler was the first to turn British constituency results into percentages, and thereby founded the science of psephology. Appearing as an expert on Britain’s first TV election night in 1950, he promoted the idea of ‘swing’ to explain gains and losses to the public. Later, he invented the BBC’s popular Swingometer, which is still used today. He has publicly analysed every British general election since the Second World War, and done more than anyone to transform TV coverage of elections, with a style that combined authority and showmanship with his phenomenal memory for facts and figures.

First summoned by Churchill for polling advice when he was only twenty-five, David Butler got to know most of Britain’s senior post-war politicians and has acted as a highly influential voice behind the scenes. He wrote dozens of books and taught scores of leading figures in politics and the media around the world, building a huge international reputation which regularly took him to America, Australia and India.

Award-winning TV correspondent Michael Crick has known David Butler for forty years. In Sultan of Swing, based on interviews with Butler himself, his friends, family and colleagues, and with access to many previously unseen papers, Crick chronicles the long and energetic life of the greatest analyst of British elections – a story that weaves its way through post-war history with surprises, colour and humour.

“Michael Crick, a true original, in brilliant pursuit of the life of David Butler, a true genius.”

“David Butler invented the modern study of elections. He was the greatest entrepreneur of the post-war era in political science, and a remarkable human being. From the opening tale of Butler’s fateful meeting with Winston Churchill, Michael Crick writes of his life and work with brilliance, sympathy and insight. I could not put it down.”

“Michael Crick’s excellent book does justice to David Butler’s remarkable life. Over more than seventy years, David has shown everyone – from Winston Churchill to today’s millennials – not just how to analyse elections, but how to make sense of our democracy.”

“The story of David Butler is the story of all the elections anyone can remember. And what a brilliant story it is – as three-dimensional an account as any modern election graphic. Hats off to Michael Crick for showing us every facet of this national treasure. Beautifully written, with as much detail as a cut diamond, this book is pure joy.”

"David Butler had a wonderful ability to blend teaching with the utmost academic rigour, while really bringing politics to life.”

"Michael Crick’s biography of David Butler, who is now 94, gives some fascinating and unexpected insights not just into our politics but into the way the British Establishment works."