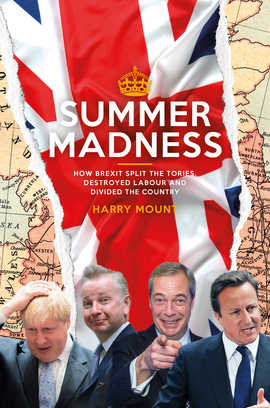 Summer Madness How Brexit Split the Tories, Destroyed Labour and Divided the Country

In the three short weeks between the EU referendum on 23 June 2016 and Theresa May’s ascent to Downing Street on 13 July, Brexit morphed into a mass murderer, destroying everything it touched. As the Bullingdon boys, David Cameron and George Osborne, were sensationally whacked, Mafia-style, the Cabinet was drained of blue blood and the tight-knit Notting Hill Set torn asunder.

Michael Gove stabbed fellow Brexit cheerleader Boris Johnson squarely in the back, while Jeremy Corbyn joined the ranks of the living dead, as twentythree shadow Cabinet members deserted him. Even Nigel Farage, the only victorious party leader in the referendum, resigned the UKIP leadership, days after the vote.

So how did Brexit turn into this weapon of mass political destruction? In this compelling insider account, journalist Harry Mount reveals the plots, power struggles and personal feuds that brought down a government. Analysing the nationwide split between Europhiles and Eurosceptics, and reflecting on Brexit’s parallels with Donald Trump’s victory, Summer Madness is the ultimate guide to the biggest political coup of the century.