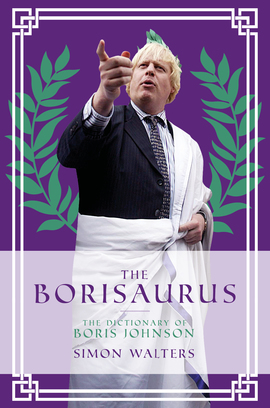 The Borisaurus The Dictionary of Boris Johnson

Do you know your boosterism from your backstop-ectomy? Can you work out what’s imbecilio and what’s just an inverted pyramid of piffle? Can you tell Prometheus from Cincinnatus, and would  you recognise Latinate evasion if you heard it?

In The Borisaurus, seasoned journalist Simon Walters presents a collection of over 500 of Prime Minister Boris Johnson’s wittiest, most inventive and most shocking words and phrases compiled in one brilliant dictionary, with every entry accompanied by a guide to  its etymology, meaning and context.

A former journalist and author, Boris is no stranger to having his prose dissected; perhaps more than any other leader, he knows the importance of words, but he also knows how to have serious fun with them. But where does Boris find the inspiration for his literary lyricism, and what is he alluding to when he name-checks Churchill, Nero or Paris Hilton?

Welcome to The Borisaurus, a compelling and revealing guide to the tricks and tactics that have helped Boris to become one  of the most divisive rhetoricians  in modern history.

“Some PMs have struggled with language, so get others to write their words. Boris sees language as Play-Doh, as raw material to be manipulated into an infinite number of novel shapes and combinations. This ingenious book takes us on a journey into the mind of our Play-Doh player-in-chief.”

Anthony Seldon, historian and author of May at 10

“For the past three decades Simon Walters has been Westminster’s most brilliant political journalist. In The Borisaurus, he applies his talents to a fascinating exploration of how Boris Johnson has invented a new type of political discourse. Everyone who wants to understand British politics today must read this book and keep it by their desk.”

“Boris Johnson is perhaps the most beguiling wordsmith of the age, soaring to the peak of high office on wings of glittering prose. How did he amass his memory bank of instantly retrievable bon mots and pitch-perfect classical allusions? Here, Simon Walters studies the BoJo trail from Eton to Downing Street, filtering the pure ore from the glister of fool’s gold.”

Trevor Kavanagh, journalist and former political editor of The Sun