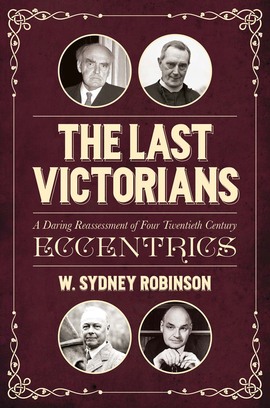 “We of this age behold with amazement the sweep and range of the great Victorians.” – Morning Post, May 1921

Ever since the publication of Lytton Strachey’s Eminent Victorians in 1918 it has been fashionable to ridicule the great figures of the nineteenth century. From the long-reigning monarch herself to the celebrated writers, philanthropists and politicians of the day, the Victorians have been dismissed as hypocrites and frauds – or worse. Yet not everyone in the twentieth century agreed with Strachey and his followers. To a handful of eccentrics born during Victoria’s reign, the nineteenth century remained the greatest era in human history: a time of high culture for the wealthy, ‘improvement’ for the poor, and enlightened imperial rule for the 400 million inhabitants of the British Empire. They were, to friend and foe alike, ‘the last Victorians’ – relics of a bygone civilisation.

In this daring group biography, W. Sydney Robinson explores the extraordinary lives of four of these Victorian survivors: the ‘Puritan Home Secretary’, William Joynson-Hicks (1865–1932); the ‘Gloomy Dean’ of St Paul’s Cathedral, W. R. Inge (1860–1954); the belligerent founder of the BBC, John Reith (1889–1971), and the ultra-patriotic popular historian and journalist Arthur Bryant (1899– 1985). While revealing their manifold foibles and eccentricities, Robinson argues that these figures were truly great – even in error.

[Robinson] does have an excellent eye for detail. His cameo of Lord Reith, ravaged in old age by frustrated megalomania, is unforgettable.

It is scrupulously researched, intelligent and un-commonly well-written… Robinson has real talent.

This collection of sprightly essays is a cracking good read.

4 stars. [Robinson] does an excellent job of capturing their numerous foibles and eccentricities.

Robinson’s enthusiasm for his subjects and racy account of their oddities makes for a volume that is enjoyable to read.

Robinson’s aim is to rehabilitate their rather tarnished reputations and, whilst he never flinches from portraying their less attractive traits, he argues persuasively for according each greater respect for the ideas that they so passionately championed.