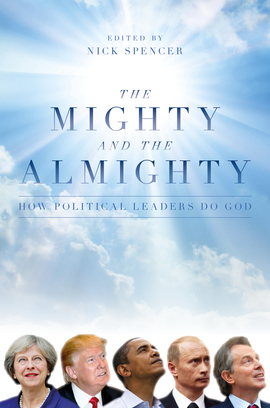 The Mighty And The Almighty How Political Leaders Do God

For a secular age, we have a lot of religious politicians.

Theresa May, Vladimir Putin, Angela Merkel, even Donald Trump all profess Christianity, as did Obama, Brown, Sarkozy, Bush and Blair before them. Indeed, it is striking how many Christian Presidents and Prime Ministers have assumed the global stage over recent years. In spite of Alastair Campbell’s oft- (and mis-) quoted line, ‘We don’t do God’, it seems like we definitely do.

But how sincere is this faith? Is not much of it simply window-dressing for the electorate, paste-on haloes to calm the moral majority? Conversely, how dangerous is it? If we elect our politicians to do our democratic will, do we really want them praying to God for advice?

The Mighty and the Almighty looks at some of the biggest political figures of the past forty years – from Thatcher and Reagan, through Mandela and Clinton, to May and Trump  – and looks at how they ‘did God’. Did their faith actually shape their politics, and if so, how? Or did their politics shape their faith? And does it matter if it did?

In an age when religion is more important on the global stage than anyone would have predicted fifty years ago, this book will tell you everything you want to know, and some things you won’t, about how the Mighty get on with the Almighty.

“We don’t do God’ is one of my most reused, and misunderstood, sound bites. I said it to stop a long interview with Tony Blair, but it has since been taken to mean something far deeper. It is true I was against politicians talking about faith, for fear of being accused of using it politically, but I am a pro-faith atheist. Tony Blair, on the other hand, certainly does do God. His faith was and is important and, as this book shows, he is not alone among Prime Ministers and Presidents in that. Even if, like me, you don’t share those religious beliefs, it’s important to understand how it is that our ‘secular’ politics is also so religious.”