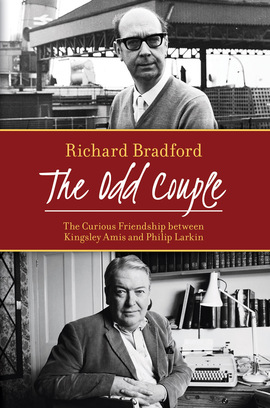 Kingsley Amis and Philip Larkin altered the landscape of post-war British fiction and poetry and were among the most popular serious literary writers of the second half of the twentieth century. Respectively, their fiction and poetry – particularly works such as Lucky Jim and The Whitsun Weddings – have captured the imagination of the reading public and speak to us of something innately English and timeless.

Published works only touch the surface of the bizarre and magnetic relationship between these two controversial and eccentric writers. The true, complex story is told here for the fi rst time. Thoroughly researched, and brilliantly composed by Richard Bradford – author of critically acclaimed separate biographies of both writers, and of Martin Amis – The Odd Couple shows us these two literary giants as we have never seen them before. It also shows us how much of their most important work is an index to their relationship.

Had they not met they would not have become the writers they were.

a lively, readable and often scandalous portrait of that friendship.

This is a wonderful, fascinating account of two stars of the post-war literary generation, and their mutual influence