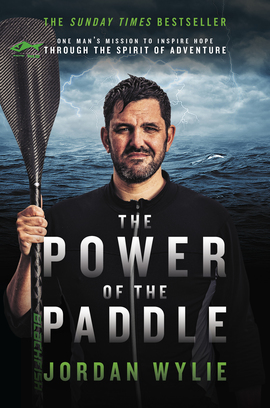 ‘His name was Ibrahim. He was about five years old and the thing he wanted most in the world was to go to school.’

In a tiny country on the Horn of Africa, extreme adventurer, former soldier and star of Channel 4’s Hunted Jordan Wylie made an extraordinary promise to a remarkable young boy. Ibrahim’s home Djibouti is a refuge from neighbouring war zones, playing host to children excluded from the basic privileges we take for granted in the West. So, armed with skills learned from a lifetime of adventures, Wylie vowed to raise funds to build a new school for those children.

And thus began a series of exceptional challenges, seeing Wylie row solo across the pirate-infested Bab el-Mandeb Strait in a world-first and run extreme marathons in ice-cold climates. To cap it off, he embarked on a journey stand-up paddleboarding around mainland Great Britain, along the way facing military firing ranges, crazy teenagers on jet-skis, psychotic jellyfish and, finally, Covid-19.

This is the inspirational true story of the lengths one man went to fulfil a young boy’s dream – and of the good that can be achieved even in the hardest of times.

“Jordan is a fantastic role model for young people. He shows us all what you can achieve when you put your mind to it.”

“It was a real privilege to work alongside Jordan and see first-hand his commitment to helping inspire the next generation.”

“A truly inspiring adventure filled with passion, purpose and humility.”

“The extraordinary story of a former British soldier who had already done his duty but who went back to serve those whose lives are still blighted by war. Jordan Wylie epitomises the core values of our armed forces and veterans in everything he does to help others.”

“A very powerful true story of one man’s determination and endeavour to deliver on a special promise using the spirit of adventure.”

“Epic ocean adventures from a man who continues to push the boundaries of physical and psychological endurance.”

“A highly accomplished adventurer who continues to inspire young people around the world to never give up and follow their dreams.”