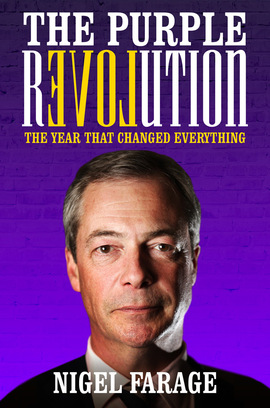 The Purple Revolution The Year That Changed Everything

Twenty-one years after its formation as a single-policy protest party, and on the eve of what promises to be one of the closest, most exciting general elections in recent memory, the truly remarkable rise of UKIP and its charismatic leader, Nigel Farage, have caused nothing less than a tectonic shift in British politics. And the aftershocks are being felt far beyond the corridors of power in Whitehall…

This book, written by the man who orchestrated that extraordinary rise, is not an autobiography, but rather the untold story of the journey UKIP has travelled under Farage’s leadership, from the icy fringes of British politics all the way to Westminster, where it is poised to claim the popular vote. In it, he reveals for the first time exactly how, over the last few years, Farage and his supporters have ushered in a very English revolution: secretly courting MPs right under the nose of the political establishment, in the tearooms and wine bars of the House of Lords.

With characteristic wit and candour, Farage takes us beyond the caricature of the beer-drinking, chain-smoking adventurer in Jermyn Street double-cuffs as he describes the values that underpin his own journey: from successful City trader to (very) outspoken critic of the European Union and champion of Britain’s right to govern itself.

One of the most revealing political memoirs in years.

His political breakthrough has been stunning. The Purple Revolution is the ultimate political book by a politician’s politician.

If you admire Farage, this is definitely the authentic man himself.