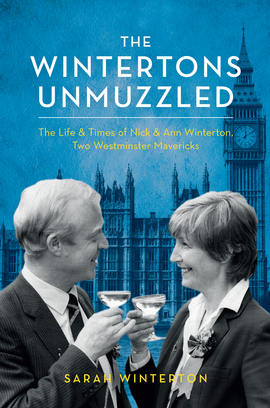 With two MPs for parents, Sarah Winterton was one of the proudest women in the country. She felt as though her family was at the centre of events, and her parents, Nicholas and Ann Winterton – respective Members for Macclesfield and Congleton – were truly making a difference at the heart of British politics.

But when the Wintertons became caught up in the parliamentary expenses scandal in 2009, Sarah was forced to question some of her longest-held assumptions about politics, family and the media. Was the life of a backbench MP worth the candle? Why slog away for hours on behalf of your constituents, if your only reward was to be vilified by Fleet Street?

In this affectionate, defiant memoir, Sarah Winterton celebrates a pair of MPs renowned for their bloody-minded independence, who remain the longest-serving couple in the history of the House of Commons. She warmly and unashamedly defends not just her outspoken parents, but an entire political class in a time of great upheaval. With her rare perspective on 21st-century British politics, Sarah reveals a lost political world through insightful anecdotes, and asks challenging questions about the character of modern MPs and the functioning of Britain’s parliamentary democracy.

“A welcome rebuke to anyone who believes political memoir cannot also be enjoyable… as good a read and as much fun as its title suggests.”

“Nicholas and Ann Winterton had a powerful impact on the House of Commons. They were both independent spirits who above all else were patriots, and they helped to lay the foundations to ensure that the United Kingdom eventually left the European Union. I strongly recommend their book.”

“Ann and Nick Winterton are likely to be remembered long after many of their contemporaries as true mavericks of British politics. In this entertaining memoir, their daughter, Sarah, captures their unwavering integrity and the fearless way in which they pursued their ideals, even defying their own party when their consciences called for it. It is highly appropriate that their book should have been written about ‘Team Winterton’, as it is their collaboration and loyalty that has made them such an influential pair in the corridors of Westminster.”

“Nicholas Winterton changed how the Commons worked, challenging toothless systems and party Whips in a way that made an impression on both sides of the House. This book is a testament to that independent spirit and a fascinating look behind the scenes of Parliament.”