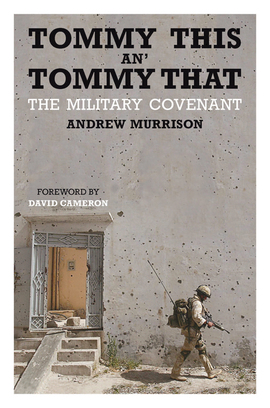 Tommy This an' Tommy That

There is nothing new about the military covenant. When it is broken there is generally outrage the mole at the heart of the expenses scandal allegedly leaked MPs data to the Telegraph after being influenced by the ill-provisioned troops moonlighting as Commons guards to buy basic military equipment.

The unspoken agreement between the government, the public and those offering unlimited liability in the service of the country, is rooted in antiquity. Over the course of 3,000 years it has been variously honoured and ignored. Kipling s 1892 poem Tommy makes sardonic reference to this in the words of the eponymous squaddie.

Tommy Atkins came to symbolise the British Army redcoat as he prepared to shift into khaki and face the horrors of trench warfare. However, it has been the discretionary wars of the twenty-first century Blair s wars that have caused us to measure out and define the parameter of the duty owed to those that potentially pay the ultimate price in the service of their country.

In Tommy This an Tommy That Andrew Murrison uses his perspective as a senior military doctor, Iraq veteran and, latterly, frontline politician, to dissect the events of the past ten years and set them in a historical context. Murrison charts the way in which societal and political changes have impacted on the wellbeing of uniformed men and women both within the theatre of war and beyond it. Using historical examples he chronicles the nation s changing sense of obligation towards the military, charts how the state has been shaped by it and looks at the future of the covenant.