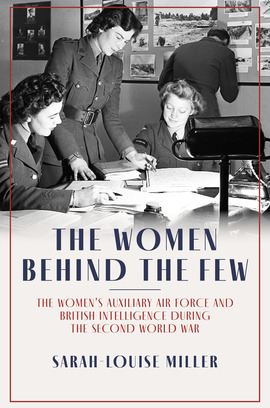 ‘Never in the field of human conflict was so much owed by so many to so few.’

The courageous pilots of the Royal Air Force who faced the Luftwaffe in the Battle of Britain, affectionately known as ‘the Few’, are rightly hailed as heroes. Recently, efforts have been made to recognise the thousands who supported RAF operations behind the scenes. And yet one group remains missing from the narrative: the Women’s Auxiliary Air Force.

The Women Behind the Few explores the Second World War from the perspective of the WAAFs working behind the scenes to collect and disseminate vital intelligence – intelligence that resulted in Allied victory.

WAAFs worked within the Dowding System, the world’s most sophisticated air defence network, as well as in the Y Service, intercepting German communications. Throughout the Blitz, they used radar to aid Fighter and Bomber Commands in protecting Britain’s civilians.

WAAFs also assisted with the Allied offensive bombing campaign and were behind the discovery of the terrifying German V-weapons. Their work was critical ahead of the Normandy landings and they were present in their hundreds at Bletchley Park.

In this thrilling book, Sarah-Louise Miller brings the women of the force back to life, celebrating their wartime contribution to British military intelligence. Hidden behind the Few but vital to their success, WAAFs supplied the RAF with life-saving information. Here, for the first time, is their story.

“Vividly written and based on superb research, this is undoubtedly one of the best books on the role of women at war so far.”

Michael Smith, author of The Secrets of Station X: How the Bletchley Park Codebreakers Helped Win the War

“At the beginning of the Second World War, the prevailing view was that women didn’t have the education, intellect or ability for intelligence work. With a lively mix of personal testimony and scholarly analysis, Sarah-Louise Miller shows how in fact women performed superb work in the WAAF as radar operators, signals analysts, photo interpreters and in many other fields. The Women Behind the Few restores the WAAFs to their rightful place in the full narrative of the conflict.”

Taylor Downing, author of Spies in the Sky: The Secret Battle for Aerial Intelligence during World War II

“Sarah-Louise Miller presents an animated, in-depth account of the crucial role of the Women’s Auxiliary Air Force in the intelligence services during the Second World War. Her book makes an important and welcome addition to scholarship on wartime women.”

“Richly illuminating, this is a powerful and deeply engrossing history of the women whose unsung war work was consigned for so many years to the shadows: from Bletchley Park to secret listening stations, from the nerve centre of Fighter Command to the espionage of the Special Operations Executive, WAAFs were at the core of Britain’s secret intelligence war. And Sarah-Louise Miller’s vivid exploration has given us an eye-opening range of accounts that pay proud tribute to these brilliant, dedicated women.”

Sinclair McKay, author of The Secret Life of Bletchley Park

“The vital contribution of the enterprising and courageous women who helped to win the battle of the air in the Second World War is brought to life in Sarah-Louise Miller’s important and absorbing book.”

“The women of the WAAF made a vital and secret contribution to Britain’s victory in the Second World War and yet remained hidden from history for many years. Sarah-Louise Miller reveals these remarkable figures, offering us a compulsively readable group portrait of women who operated in almost every aspect of British intelligence. Meticulously researched and compellingly written – a triumph!”

“A captivating and meticulously researched account of the crucial but hidden role played by the Women’s Auxiliary Air Force in the Second World War. I was hooked from page one.”

Lucy Fisher, author of Women in the War: The Last Heroines of Britain’s Greatest Generation

“A rip-roaring read about a previously hidden aspect of the Second World War. Dr Miller shows how behind every good RAF officer there was a brilliant female intelligence officer.”

“A marvellous account of a hitherto unknown subject of immense importance.”

Diane Atkinson, author of Rise Up, Women! The Remarkable Lives of the Suffragettes