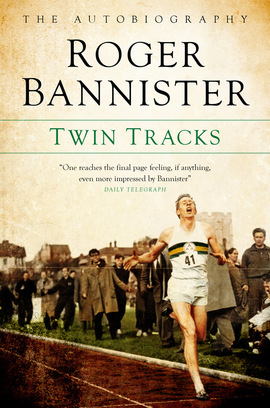 It was a blustery late spring day in 1954 and a young Oxford medical student flung himself over the line in a mile race. There was an agonising pause, and then the timekeeper announced the record: three minutes, fifty-nine point four seconds.

But no one heard anything after that first word - 'three' .

One of the most iconic barriers of sport had been broken, and Roger Bannister had become the first man to run a mile in under four minutes. To this day, more men have conquered Mount Everest than have achieved what the slender, unassuming student managed that afternoon.

Featured among the Sunday Times's sporting frontrunners of 2014, Twin Tracks tells the full story of the talent and dedication that made him not just one of the most celebrated athletes of the last century but also a distinguished doctor, neurologist and one of the nation's best-loved public figures.

Blog: The Day I Ran The Four Minute Mile

‘The description of his joy in running and the breaking of the barrier, stride by stride, are majestic.’

[T]he romance of running is at the heart of this very readable story.

One reaches the final page feeling, if anything, even more impressed by Bannister. 4/5...

[A] reflective and readable memoir... . In short, he is a hero for our times and — before the term was irredeemably vulgarised — a national treasure.

His welcome open and honest autobiography...

I recommend this book for readers like me, who rarely delve into sports biographies. I was engrossed from the start, reading it from cover to cover over two days (and nights).