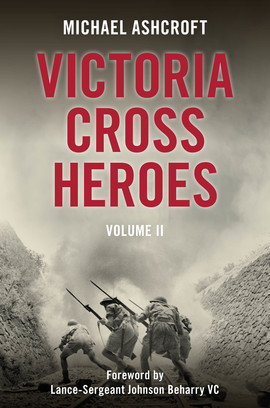 THE VICTORIA CROSS is Britain and the Commonwealth’s most prestigious gallantry medal for courage in the face of the enemy. It has been bestowed upon 1,355 heroic individuals from all walks of life since its creation during the Crimean War.

Lord Ashcroft, who has been fascinated with bravery since he was a young boy, now owns 200 VCs, by far the largest collection of its kind in the world. Following on from the bestselling Victoria Cross Heroes, first published in 2006 to mark the 150th anniversary of the award, Victoria Cross Heroes: Volume II gives extraordinary accounts of the bravery behind the newest additions to Lord Ashcroft’s VC collection – those decorations purchased in the last decade.

With sixty action-packed stories of courageous soldiers, sailors and airmen from a range of global conflicts including the Indian Mutiny of 1857–58, the Second Anglo-Boer War of 1899–1902 and the First and Second World Wars, this book is a powerful testament to the strength of the human spirit and a worthy tribute to the servicemen who earned the Victoria Cross. Their inspirational deeds of valour and self-sacrifice should be championed and never forgotten.

“The VC is a very special subject for a book. Behind every award is a remarkable story involving all those qualities that we British hold most dear: loyalty, duty, sacrifice, care for others, a great good humour and a deep humility. They are all here amongst the many stories of this most democratic and historic medal.”

HRH The Prince of Wales, from the Foreword to Victoria Cross Heroes