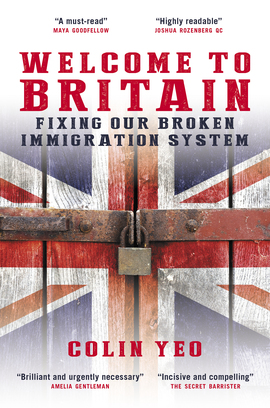 How would we treat Paddington Bear if he came to the UK today? Perhaps he would be a casualty of extortionate visa application fees; perhaps he would experience a cruel term of imprisonment in a detention centre; or perhaps his entire identity would be torn apart at the hands of a hostile environment that delights in the humiliation of its victims.

Britain thinks of itself as a welcoming country, but the reality is very different. This is a system in which people born in Britain are told in uncompromising terms that they are not British, in which those who have lived their entire lives on these shores are threatened with deportation, and in which falling in love with anyone other than a British national can result in families being ripped apart.

Now fully updated to include the Nationality and Borders Bill, in this vital and alarming book, campaigner and immigration barrister Colin Yeo tackles the subject with dexterity and rigour, offering a roadmap of where we should go from here as he exposes the injustice of an immigration system that is unforgiving, unfeeling and, ultimately, failing.

“An incisive and compelling analysis of how muddled political thinking has caused our immigration laws to go so badly wrong, and what must be done to reform them. Highly readable and cogently argued, a copy should be put on the desk of every tabloid editor and every MP.”

“Successive governments have allowed the UK’s immigration laws to become ever more incomprehensible and increasingly unfair, confident that few will understand what is happening and even fewer will care. Colin Yeo understands the law better than most and cares very much indeed. As well as providing a highly readable account of what the law is, he offers his own vision of what it should become.”
Joshua Rozenberg QC

“Colin Yeo presents us with a forensic examination of the UK’s labyrinthine, costly and dehumanising immigration system – a must-read.”
Maya Goodfellow, author of Hostile Environment: How Immigrants Became Scapegoats

“This is a brilliant and urgently necessary book. Colin Yeo writes piercingly about the chaotic cruelty of Britain’s immigration system and offers meticulously well-informed proposals for reform of the Home Office. He strips away with lawyerly precision the nonsense which informs so much of our toxic debate on immigration. Packed with chilling accounts of lives ripped up by the Home Office, this is an intensely disturbing read.”

“Excellent … delivers a powerful critique of the failings of the system and offers meticulously well-informed and realistic proposals for reform. Yeo is the perfect guide for a tour of Britain’s broken immigration system.”