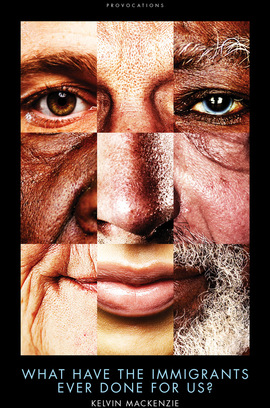 What Have The Immigrants Ever Done For Us? Provocations Series

Right now, immigration is a central point of discussion in both political debate and cultural discourse. With the growth of right-wing parties in Britain, it seems that animosity towards outsiders is increasing every day – after all, immigrants come to our country, steal our jobs and exploit our public services, but what do they give us in return?

In this bold new addition to the Provocations series, Kelvin MacKenzie speaks out about immigration in the thought-provoking, no-holds-barred manner the public has come to expect from him ... but with one crucial twist.

Indeed, he makes the point that many of the institutions we deem to be quintessentially British – Marks & Spencer, Stephen Fry, the NHS, the Great Western Railway and even Kelvin’s former newspaper, The Sun – would not exist at all without immigration. As paranoia and misinformation corrupt British opinion, it
is more important than ever to acknowledge the monumental contribution immigrants have made to this country historically, culturally, economically, politically – and continuously.

Like Monty Python before us, the time has come to ask what the immigrants have ever done for us – although perhaps it would be more apt to ask what we would do without them.