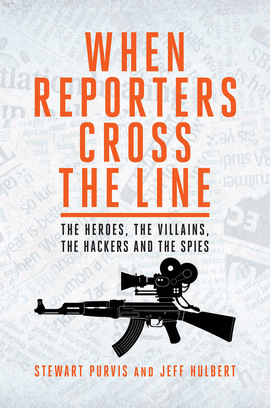 When Reporters Cross The Line The Heroes, the Villains, the Hackers and the Spies

By Jeff Hulbert and Stewart Purvis

When Reporters Cross the Line tells the true story of moments when the worlds of media, propaganda, politics, espionage and crime collide, casting journalism into controversy. Its pages feature some of the best-known names in British broadcasting, including John Simpson, Lindsey Hilsum and Charles Wheeler. There are men and women who went beyond recognised journalistic conventions. Some disregarded the code of their craft in the name of public interest; some crossed the line in ways that had truly shocking consequences. Many of the details have been kept as closely guarded secrets – until now.
This unique account of modern reporting examines the lengths to which journalists on the front line are prepared to go to get a story or to espouse a cause. Journalistic heroes and villains abound, but certain of those heroes were flawed, and some of the villains were surprisingly principled. In the heat of war and political conflict, boundaries are ignored and ethics forgotten – and not just by opposing armies.
In this extraordinary book, Stewart Purvis and Jeff Hulbert offer unparalleled access to the minds of reporters and to the often disturbing decisions they make when faced with extreme situations. In doing so, it hammers home some unpalatable truths, posing the fundamental question: where do you draw the line?

Visit the Guy Burgess microsite now to listen to the new Guy Burgess voice recording which was granted to the authors by the FBI.

[The book] offers unparalleled access to the minds of reporters and to the often disturbing decisions they make when faced with extreme situations.

This book should be on the reading list for every journalism and philosophy course taught in British universities.

I would like to commend to every reporter and editor, no matter how experienced, Stewart Purvis's excellent book 'When a Reporters Cross the Line: the Heroes,the Villains,the Hackers and the Spies'.It should be essential reading for every journalist.