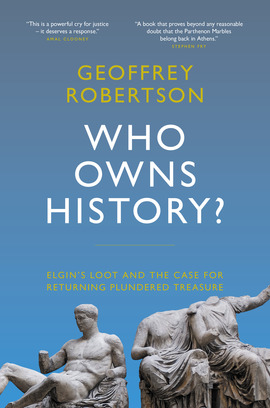 Who Owns History? Elgin’s Loot and the Case for Returning Plundered Treasure

The biggest question in the world of art and culture concerns the return of property taken without consent. Throughout history, conquerors or colonial masters have taken artefacts from subjugated peoples, who now want them returned from museums and private collections in Europe and the USA.

The controversy rages on over the Elgin Marbles, and has been given immediacy by figures such as France’s President Macron, who says he will order French museums to return hundreds of artworks acquired by force or fraud in Africa, and by British opposition leader Jeremy Corbyn, who has pledged that a Labour government would return the Elgin Marbles to Greece. Elsewhere, there is a debate in Belgium about whether the Africa Museum, newly opened with 120,000 items acquired mainly by armed forces in the Congo, should close.

Although there is an international convention dated 1970 that deals with the restoration of artefacts stolen since that time, there is no agreement on the rules of law or ethics which should govern the fate of objects forcefully or lawlessly acquired in previous centuries.

Who Owns History? delves into the crucial debate over the Elgin Marbles, but also offers a system for the return of cultural property based on human rights law principles that are being developed by the courts. It is not a legal text, but rather an examination of how the past can be experienced by everyone, as well as by the people of the country of origin.

A book that proves beyond any reasonable doubt that the Parthenon Marbles belong back in Athens. Elgin’s heist prevents the modern world appreciating this ancient wonder – created by the same people who gave us democracy, philosophy and (best of all) comedy. Other cultural crimes must also be redressed, and in this important book Geoffrey Robertson shows why, and how.

A book which provides, once and for all, the case for reuniting the Parthenon Marbles in Athens. This is a powerful cry for justice – it deserves a response.

Who Owns History? is "a robust, opinionated take on a complex debate".

Who Owns History? is "a well-aruged and compelling read".

Rather His Own Man
Lessons From History
Brexit Unfolded
Ernest Bevin