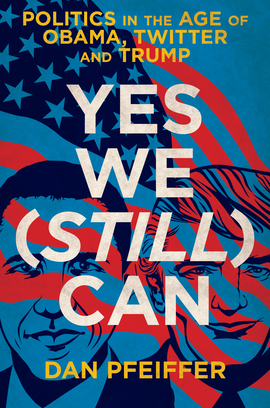 Yes We (Still) Can Politics in the age of Obama, Twitter and Trump

Barack Obama was the breath of fresh air the Democrats didn’t even realise they needed. Running on a platform of hope, change and progress, he won his first term with a decisive landslide, completely rewriting the rules of politics.

So how did we go from Obama to Trump – and how can the Democrats turn the tide? Once his communications director, and now co-host of Pod Save America, Dan Pfeiffer was at Obama’s side through two presidential elections and six years in the White House. Offering up surreal stories from behind the scenes, Pfeiffer explains how Obama navigated the forces that propelled Trump to power, and metes out critical wisdom on how the Democrats can reverse the country’s fate.

A funny, thoughtful and humble account of Pfeiffer’s time on the front line of politics, Yes We (Still) Can is not just a memoir but an action plan for those who still dare to hope for change – and for the end of the Trump era.

Pfeiffer, Pod Save America co-host and former Obama senior adviser, in an entertaining work of memoir–cum–political strategy, spells out the strengths of his old boss as campaigner and president and seeks to shed light on why Donald Trump won in 2016. With the goal of ensuring the liberal cause isn’t lost in future elections, Pfeiffer describes how he was hired by Obama during the 2008 campaign and how for the next six years he had a front-row seat to the president’s triumphs and struggles. Taking a conversational, occasionally snarky tone, he brings the reader into high-level meetings, such as one over tax cuts held in the vice-president’s office; a fund-raiser attended by Kanye West; and his own awkward moments (he once split his pants in the Oval Office while preparing the president for a press conference). Throughout, Pfeiffer offers advice in bold type, based on the successes of Obama and Trump, on running a winning campaign, using Twitter, dealing with fake news, and other topics crucial to elections. “The path back for Democrats is pretty clear,” he writes, “and it doesn’t mean becoming more like Trump.” Those who share Pfeiffer’s admiration of Obama and his hopes for a Democratic resurgence—and, of course, fans of his podcast—will love both the chatty insider anecdotes and the advice.

Yes We (Still) Can captures the lessons of Yes We Did during the Obama years and offers clear lessons for why 2016 happened, and how progressives must adapt to win again.