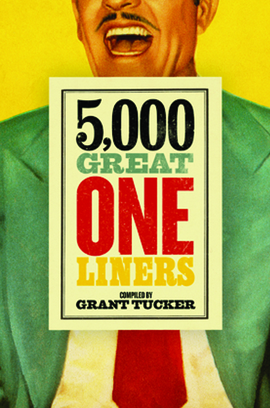 My mate told me that I just don’t understand irony. Which was ironic because we were at a bus stop at the time.

A dyslexic man walks into a bra.

An onion just told me a joke. I don’t know whether to laugh or cry.

A priest, a rabbi and a blind man walk into a bar and the bartender says, ‘What is this, some kind of joke?’

I got chatting to a lumberjack in a pub. He seemed like a decent feller.

A neutron walks into a bar and says to the barman, ‘How much for a pint?’ To which the barman replies, ‘For you, no charge.’

I’ll never forget what my granddad said to me just before he kicked the bucket. He said, ‘Grandson, how far do you think I can kick this bucket?’

Whether told in the rugby clubs of Wales or the gentlemen’s clubs of London, their sharpness and simplicity unites us all. Short, sweet and wickedly clever, they hold a special place in the annals of comedy, and as the rise of Twitter heralds a resurrection of the art form, there seems no better time to celebrate the immortal one-liner.

In this book, Times diary columnist Grant Tucker does just that, bringing together 5,000 of the funniest one-liners ever told in one definitive volume. Laugh-out-loud funny, 5,000 Great One-Liners has all the quips, zingers, puns and wisecracks you’ll ever need – and a whole lot more.

“It’s an admirable gift, being able to compress wit and wisdom into a trenchant sentence or so, and Grant Tucker has harvested the world’s best – an Olympiad of linguistic play.”