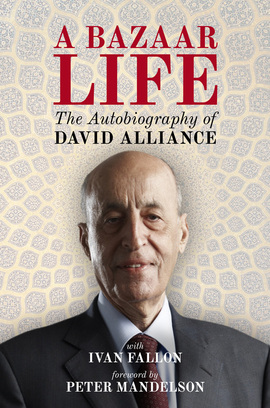 A Bazaar Life The Autobiography of David Alliance

By David Alliance and Ivan Fallon

The extraordinary rags-to-riches story of one of Britain's most successful businessmen.

At the age of thirteen, David Alliance was taken out of school by his father and apprenticed into the Grand Bazaar in Tehran, where he learned the business skills that were to prove invaluable in one of the most successful business careers of modern times. In 1950, with just 14 in his pocket, he arrived in Manchester in search of textile bargains, going hungry and sometimes forced to sleep on the street. Six years later, however, when he was still only twenty-four, he bought a loss-making textile mill, turned it around in six months and went on to build the biggest textile company in the Western world. At one stage his businesses, including his mail-order company, N Brown Group, employed more than 80,000 people.

He did it through a mixture of incredibly hard work, creativity and nerve, and some of his takeovers, often of companies many times larger than his own, were breathtaking in their ingenuity. No obstacle was unscalable – his guiding principle all his life was that everything is achievable ‘if you put your heart and soul into it’.

Humble, charming and delightfully honest, Alliance’s extraordinary rags-to-riches tale is not only that of a remarkable journey, but goes far beyond the world of business. Among many stories which have until now remained secret, Alliance tells of how he used the skills he learned in the bazaar to negotiate with the dictator Mengistu Haile Mariam to allow the Ethiopian Jews to be airlifted to Israel, his friendship with the Shah of Iran and the first-hand insight into the infamous Guinness affair.

In A Bazaar Life, written with Ivan Fallon, he sets out the lessons he has learned in a long career, and the principles that have guided him. Young – and older – entrepreneurs can learn a lot from his story.

It’s a remarkable story of determination and derring-do, filled with gripping insights and anecdotes, and is an inspiration to all who come to these shores seeking opportunity, fortune and a place they can call home.

[A] revelatory smörgåsbord of adventures, with lessons for success in the cut-throat world of business. His is an inspirational tale for refugees.

I was told by an eminent Mancunian fifty years ago to ‘keep an eye on this young man, as he’ll go far’. How true a prophecy that was. David Alliance’s life as an immigrant in Britain is quite remarkable.

A thirteen-year-old Jewish boy starts working in an Iranian bazaar and goes on to create the biggest textile empire in Western Europe – a compelling story with fascinating insights.