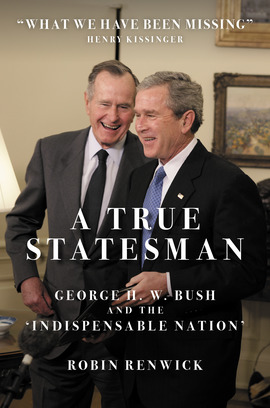 Marking thirty years since the end of George H. W. Bush’s presidency, Robin Renwick paints a warm, affectionate portrait of a President who sought to unify rather than divide his country, and whose staunch belief in diplomacy strengthened cooperation around the world.

A True Statesman explores Bush’s core belief in the United States as the ‘indispensable nation’ in helping to deal with world crises, charting his efforts to end the Cold War, secure the reunification of Germany and drive Saddam Hussein out of Kuwait.

Extending beyond Bush’s time in office, it also reflects on US foreign policy over the past three decades, examining the consequences of his successors’ differing approaches to America’s role on the world stage.

Incisively written by a former British Ambassador to Washington, this insider account offers fresh insights into both the 41st President and America’s foreign policy from Iran–Contra to Russia’s invasion of Ukraine.

“What we have been missing”

Not Quite A Diplomat
Fighting With Allies
A Journey With Margaret Thatcher
Ready For Hillary?