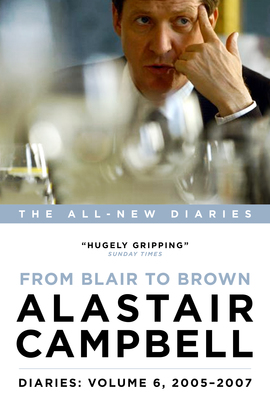 After helping Tony Blair to secure a historic third term in office, Alastair Campbell might have hoped to make good his long-planned escape from Downing Street. Blair, and Gordon Brown, had other ideas. Having negotiated Brown’s pivotal role in the 2005 election victory, Campbell then became fundamental in the transition from one Prime Minister to another.

As this volume opens, Blair’s joy at his election victory is short-lived and he knows he is running out of road. By the volume’s close, two years later, Brown is Prime Minister – and leaning on Campbell almost as much as Blair had done. Meanwhile, a fresh-faced young PR man named David Cameron becomes the new Leader of the Opposition and struggles to unite his party over Europe.

Beyond Westminster, a psychiatrist enters Campbell’s life; we follow his attempts to rebuild a normal family life, and a plethora of new challenges, from advising the British and Irish Lions to playing a charity match with footballing legend Diego Maradona.

Packed with revelations, this latest instalment in the bestselling and critically acclaimed series of diaries is an intimate account of the last days of the Blair government, and the power struggles along the way.

“These diaries remain the best and most candid historical record. Unflinchingly honest.”