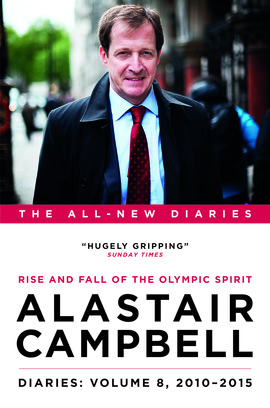 ‘If the face that Brexit Britain presents to the world today had been the face we had presented when going for the Games… no chance.

In less than a decade it feels like we have taken that Olympic spirit, the mood of London 2012, and created a Britain which represents the very opposite of all it represented, and felt like, at the time.’

It’s 2010 and Britain stands at a crossroads. After thirteen years in power, Labour find themselves out in the cold as David Cameron takes office – with a little help from the Liberal Democrats.

As the country begins its journey into austerity and, eventually, to Brexit, Alastair Campbell must grapple with his own future. The Blair–Brown years are over, with the stage set for a bitter leadership contest that will test loyalties and friendships to the limit. There are battles closer to home, too, with Campbell still torn between domestic and political life while his own and his family’s mental health come under increasing strain.

From the controversial Rose Garden speech, through the sunny optimism of the Olympics, to Cameron’s cavalier attitude to not one but two referendums, and culminating in the critical 2015 election, Volume 8 of Campbell’s acclaimed diaries is a must-read for anyone wondering how we got to where we are today – and how things might have been different.