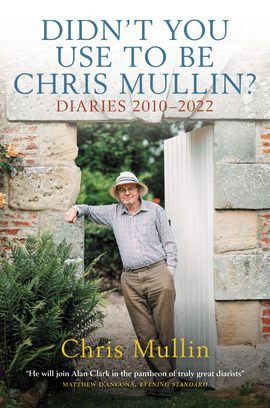 “When I retired from Parliament in April 2010, I ceased keeping a diary, on the assumption that life would no longer be of sufficient interest to justify doing so. It soon became apparent that I was wrong…

I am under no illusion, however. Despite the occasional moment in the sunshine, I have never been much more than a fleabite on the body politic. On a visit to Parliament a couple of years after retiring, I came across a former colleague. He peered at me over the top of his glasses and said, ‘Didn’t you use to be Chris Mullin?’”

Picking up where he left off in 2010’s Decline and Fall, celebrated diarist Chris Mullin returns with his trademark irreverence and keen eye for the absurd to chronicle the turbulent last decade of the second Elizabethan era.

Didn’t You Use to Be Chris Mullin? charts the collapse of New Labour, the long years of austerity politics, the highs and lows of Brexit, the rise and fall of Jeremy Corbyn and no fewer than four Tory Prime Ministers, culminating in the death of the Queen.

“He will join Chips Channon, Duff Cooper and Alan Clark in the pantheon of truly great diarists”

“Gems sprinkled across every page”

“Justly celebrated as masterpieces of the genre”