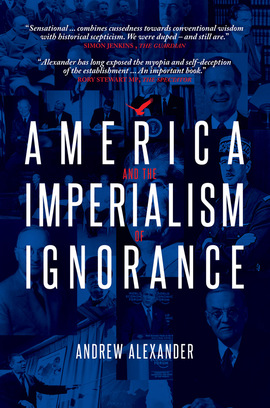 America and the Imperialism of Ignorance US Foreign Policy since 1945

Power can corrupt a nation as surely as it corrupts an individual. To borrow from Lord Acton’s dictum, power corrupts and superpower corrupts absolutely. Since the end of the Second World War, American incomprehension of the outside world has been the chief problem in international affairs, creating six decades in which war was not the last resort of diplomacy but an early option. In America and the Imperialism of Ignorance, veteran political journalist Andrew Alexander traces the ‘shoot-first’ tendency that has characterised American foreign policy from 1945 to the present day in the Middle East. He constructs a meticulous case and, informed by the opening up of Soviet archives, arrives at a shocking conclusion about the folly of the Cold War.

Gun Barons
The Men from Miami
China vs America
Trump: The Hidden Halo