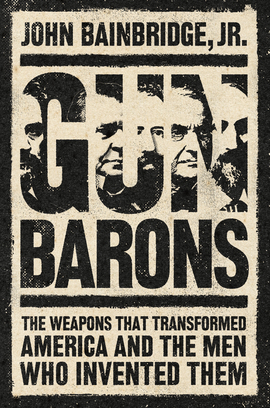 It’s the nineteenth century. As America prepares for civil war, five men living within ninety miles of one another will change the course of history. The invention and refinement of the repeating firearm—the precursor to today’s automatic weapons—means life in America and beyond will never be the same again.

In this riveting work of narrative history, veteran reporter John Bainbridge, Jr. vividly brings to life the five charismatic and idiosyncratic men at the heart of the story: the huckster and hard-living Samuel Colt; the cunning former shirt-maker Oliver Winchester; the constant tinkerer Horace Smith; the resilient and innovative businessman Daniel Wesson; and the skinny abolitionist Christopher Spencer. As the men competed ferociously, each trying to corner the market for repeating weapons, invention and necessity collided in a perfect storm: America was crashing violently towards furious sectarianism, irrevocable tensions, and, of course, bloodthirsty war.

Though capable of firing many times without reloading, astonishingly, the new guns faced a government backlash for using too much ammunition. Sold directly to soldiers, sometimes just as they were walking into battle, they quickly became coveted possessions, both during the Civil War and in the conquering of the West—and thus America’s romance with personal firearms was born.

Wide-ranging and vividly told, this is a gripping story of tenacity, conviction, innovation, and pure heartless greed.

Daniel Mark Epstein, author of The Lincolns: Portrait of a Marriage

“Writing with a sharpshooter’s eye for detail and a gunslinger’s taste for action, John Bainbridge, Jr. brings to vivid life the nineteenth-century legends who helped invent America by inventing the perfect tools for killing. It’s not all pretty history, but in Bainbridge’s deft hands it is always propulsive and fascinating, and very often funny and moving. Deeply researched, rich in insight, Gun Barons widens our understanding even as it enchants us with its masterful prose.”

Jim Rasenberger, author of Revolver: Sam Colt and the Six-Shooter That Changed America

“With skill and flair, John Bainbridge, Jr. cuts through the myths, romance, and propaganda to deliver true accounts of inspired drive and monomania, of catastrophic mistakes and vaults of genius.”

Doug J. Swanson, author of Cult of Glory: The Bold and Brutal History of the Texas Rangers

“As a SEAL Team Sniper, I was amazed to see the effect on history by something as simple as a revolver. Had the American Indians had these first, history would have been quite different. This book is a great read for everyone, and you don’t have to like guns to appreciate the historical facts. But like them or not, this book proves that guns have shaped, and continue to shape, our world.”

“A compelling tale of action and ingenuity.”

James Grant, author of John Adams: Party of One

A True Statesman
The Men from Miami
China vs America
Trump: The Hidden Halo