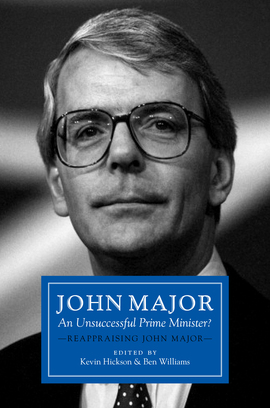 This year marks the twentieth anniversary of one of the most momentous general elections this country has ever seen. John Major’s defeat in 1997 ended a record eighteen years of Tory government, prompting accusations of failure and ignominy.

A controversial leader, Major oversaw numerous crises in international and domestic policy. Between 1990 and 1997, he presided over Britain’s participations in the Gulf War, the start of the Northern Ireland peace process, the Maastricht Treaty negotiations and, famously, Black Wednesday and Britain’s exit from the ERM.

Towards the end, Major’s government was split over Europe and ridden with allegations of sleaze. Widely criticised by the media and politicians from all parties, Major went on to be crushed by Tony Blair and New Labour in the 1997 general election.

“Twenty years after he left office, John Major’s reputation is undergoing an extraordinary recovery. Written with great insight, the essays in this fascinating volume will surely shape the way we think about Major himself, his government and 1990s Britain. Astute, thoughtful and often surprising, they suggest that his government had far more substantial achievements than was often thought at the time, while the man himself emerges as one of our most likeable, pragmatic and effective Prime Ministers. A tremendous book.”

“As a member of John Major’s Cabinet, I saw at first hand the challenges and frustrations as well as successes. It did so much better than its critics recognised at the time. I welcome this appraisal which, though by no means uncritical, offers a better balanced assessment than has previously been available.”

“A balanced, thoughtful assessment of a surprisingly formidable premier.”

“John Major had a torrid time as Prime Minister, but was a more substantial figure than his critics suggested. This timely reassessment of his record and achievements is an important corrective and should be read by everyone interested in the modern Conservative Party.”