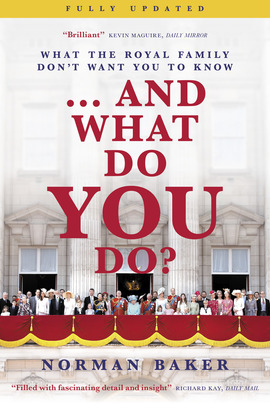 ... And What Do You Do? What The Royal Family Don’t Want You To Know

The royal family: the quintessential British institution or an antiquated, overindulged drain on the taxpayer?

For all their foibles and idiosyncrasies, the royal family wield considerable influence – and yet rather than facing the scrutiny their position merits, they enjoy sickeningly obsequious coverage which reports their activities with breathless awe.

… And What Do You Do? is a provocative and hard-hitting analysis, exposing the royals’ extravagant use of public money and the highly dubious behaviour of some among their number. Former Minister of State and current Privy Counsellor Norman Baker breaks ranks to explore the wider role the royals play in society, including the link with House of Lords reform and the constitutional position of the monarch.

Now fully updated to include new material on Prince Andrew, Prince Harry and Meghan Markle, this irreverent and uncompromising account asks urgent questions about the future of the world’s most famous royal family.

“A forensic examination of what the Royal Family means to Britain."

“With our democracy in turmoil, it’s right to be asking questions about constitutional reform, and that includes the role of the royal family. Norman Baker tackles the subject with his trademark energy and in forensic detail – looking at the facts beyond the headlines. An important book for anyone serious about questioning how our country is run.”

“They are the pinnacle of privilege, leading enviably gilded lives, but how much do we really know of the royal family’s cosy, taxpayer-funded existence? Norman Baker goes behind palace walls to shine a much-needed light on this most secretive of institutions and expose the greed, hypocrisy and – yes – disregard for public money which keep it afloat. Filled with fascinating detail and insight, … And What Do You Do? is an essential primer for understanding the myth of modern royalty.”

“Norman Baker brilliantly exposes how a Ruritanian farce is ripping us off. Vive la British revolution!”

"… And What Do You Do? is a clear-eyed assessment of our royal family, looking at its strengths, weaknesses and eccentricities. Parts of Norman Baker’s well-researched book will make for uncomfortable reading for some die-hard royal fans, but it should become an important text for anyone who cares about our monarchy and wants to see it reform and evolve to face head on the challenges of the twenty-first century."

...And What Do You Do? is a “well-researched assessment” of the Royal Family.

“Norman Baker is a fiercely independent writer and former Lib Dem MP and government minister who speaks his mind and goes where others fear to tread. After probing the mysterious death of Dr Kelly after the Iraq War, he now turns his attention to the public costs of the royal family, based on careful research and facts rather than sentiments or prejudice.”