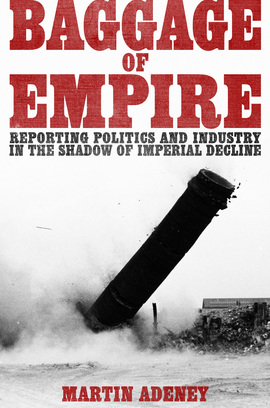 Born just as the British Empire was taking its last breaths, Martin Adeney was part of the ‘twilight generation’ caught between the imperial and postimperial ages, forced to navigate the insecurities – political, economic and cultural – faced by the British as we struggled to understand and adapt to our diminished place in the world order.

A compelling blend of memoir and narrative history, Baggage of Empire leads us through the crumbling ruins of great industries and imperial trade cities; from the retreat of the northern newspaper empires to an almost exclusively southern, metropolitan viewpoint; through the tumultuous dominance and decline of the trade unions; to the rise of Thatcherism and big business.

From the unique vantage point his career as a journalist has given him, particularly as industrial editor of BBC TV, Adeney notes that many of the issues that preoccupied us in the late ’60s and early ’70s – including immigration, housing, education, industry and communications – remain the daily currency of our political discourse. Despite all of our material prosperity and cultural self-confidence, we are all burdened, in one way or another, by the baggage of empire.

“Baggage of Empire, traces the demise of Britain’s industrial heartlands. It is a memoir and a historical study, and it has suddenly become highly topical. […] Adeney’s prose is as crisp and sober as his reporting ever was. But his argument is no less powerful for it. Britain’s postwar industrial decline was observable, perhaps avoidable, and its harmful consequences are all around us.”

“Martin Adeney has been a fine industrial journalist more or less over my whole working life. Here he writes vividly of his contact with contemporary leaders in politics, business and trade unions who, in various ways, battled against Britain’s decline as a great manufacturing nation. It is an entertaining elegy for a world that has largely disappeared along with the British Empire itself.”

Lord (John) Monks, former General Secretary of the TUC and the ETUC

“Martin Adeney’s memoir is a very well-observed account of the decline of three ‘empires’ that have defined his life. He writes with clarity and wit about the great events of the second half of the twentieth century, during which he met many notable figures, especially politicians and trade union barons, and his portraits of these people, based on his personal experience of them, are always acute and funny.”

Professor Lawrence Goldman, Director of the Institute of Historical Research, University of London

The Slow Death of British Industry
The Good, the Bad and the Greedy
The New Snobbery
Greater