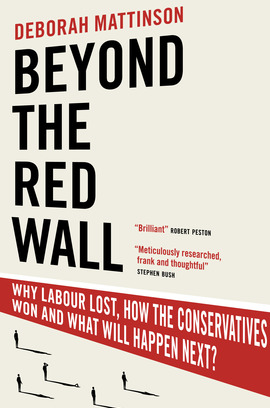 Beyond the Red Wall Why Labour Lost, How the Conservatives Won and What Will Happen Next?

How do you start an electoral earthquake? Head to the Red Wall and you might just find out. Covering some sixty seats stretching from the Midlands up to the north of England and across to Wales, the wall is constructed of the old coal, steel and manufacturing constituencies that were the bedrock of Labour victories for years. Assumed to be a stuck-in-their-ways, loyal-to-a-fault foundation for Labour, the Red Wallers changed all that on 12 December 2019 when they elected Boris Johnson, turning their constituencies blue.

Here, renowned pollster and commentator Deborah Mattinson takes the issue by the horns, asking why these proudly working-class voters were tempted by the ‘posh party’ and questioning if they will ever again make their way back to the Labour fold.

With brand-new research, including expansive interviews with Red Wall constituents, Mattinson guides us through the lives of the left-behind, finally giving them the opportunity to speak for themselves. Written at one of the most turbulent periods in modern memory, this  is a timely, far-reaching analysis of how we got to this point and where we can go next. One thing is certain: the Red Wallers have the power to change history.

“A brilliant and highly readable account of why so many traditional Labour supporters backed Boris Johnson in 2019.”

"While others theorise about why lifelong Labour voters in the Red Wall seats switched to the Tories in such vast numbers, Deborah Mattinson takes the radical approach of going to ask them. What they said is frank, forthright and fascinating.

This calm, compelling account by someone who has seen Labour at its best and worst reveals the real people behind the polls. It will make for difficult reading for both parties, but after years of neglect they expect to be heard – and no party can expect to win without listening."

“In this devastating new assessment of the fall of Labour’s Red Wall, Deborah Mattinson unpicks our most recent history with deftness, clarity and piercing awareness. Matching engaging description with immense research and, above all, convincing argument, she finally gives voice to the ‘long forgotten’, definitively reporting how the Red Wall turned blue.”

“Deborah Mattinson has long been a shrewd and sympathetic analyst of voters and their motivations. Rich with real voices, Beyond the Red Wall is a must-read for anyone who wants to understand what drove so many in Labour’s heartlands to desert the party in 2019 – and what it might take to win them back.”

“Politics is always personal. The conversations here bring to life the changing mood among the individuals who gradually lost faith in Labour and granted the Tories a thumping majority. The warning to all politicians – voters don’t belong to you.”

“A meticulously researched, frank and thoughtful guide to the United Kingdom’s new swing voters, what drives them and what that means for our politics.”
Stephen Bush, political editor, New Statesman

“Deborah Mattinson brilliantly deconstructs the Red Wall, brick by brick, using her own research and expertise, helping us to understand this overlooked group and what makes it tick. For our leaders, learning the lessons of Beyond the Red Wall will be key to whoever wins the next general election.”

"This book tries to answer one of the biggest questions of post-Brexit politics: what will happen to the winning coalition of voters that Boris Johnson put together in 2019? Deborah Mattinson brings a deep experience of understanding voters to the question of why lifelong Labour voters switched to the Conservatives, and how hard it will be to win them back. Anyone who wants to understand modern politics must read this book."