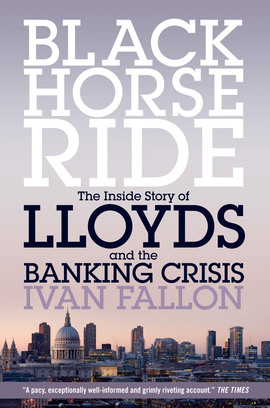 In September 2008, HBOS, with assets larger than Britain’s GDP, was on the edge of bankruptcy. Its collapse would have created the biggest economic crisis since the 1930s and a major political disaster for the Labour government. With the help and support of Gordon Brown, HBOS was rescued by Lloyds TSB, one of the country’s strongest banks, in circumstances that have since become the stuff of City legend.

In the highly acclaimed Black Horse Ride, veteran financial journalist Ivan Fallon brings together the accounts of all the power players involved in this dramatic saga for the first time, including the key roles played by the Governor of the Bank of England, the Prime Minister and the Treasury.

Through a compelling cast of prominent bankers, politicians and investors, Fallon reveals what really occurred in the aftermath of the crash of Lehman Brothers, perhaps the worst single day in banking history.

"His is an insider account, packed with telling detail and a number of fresh insights, based on interviews granted on condition of anonymity with the main actors in the drama ... Fallon spins his tale with fluency and aplomb.”

'Fallon’s book is brave. It goes against the zeitgeist and accepted wisdom. An industry devoid of supporters should seize upon it. But politicians, too, should read it and remind themselves what actually occurred.'

'Riveting… Black Horse Ride gallops away, is faster paced than most thrillers, and should be read by everyone remotely interested in what happened to British banking over the past few decades.'

'[A] readable, pacy account of very complex events. Fallon is very well informed but never gets bogged down in the detail. Anyone who is interested in the people and the politics behind what one hopes was the biggest financial disaster of the age will learn a lot.'

'A pacey, exceptionally well-informed and grimly riveting account that illuminates in microcosm the greatest economic disaster this country has suffered since the Great Depression.'

'It is hard to believe we need another book about the banking crisis […] Ivan Fallon, however has found a juicy new target in Lloyds’ 2009 purchase of Halifax Bank of Scotland.'

Capitalism
The Best of Times
The Good, the Bad and the Greedy
The New Snobbery