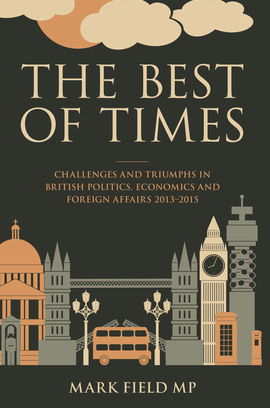 The Best of Times Challenges and Triumphs in British Politics, Economics and Foreign Affairs 2013-2015

Tensions simmer in the aftermath of 2008's catastrophic financial crash. As the darkest days of the crisis fade behind us, great obstacles to prosperity remain. Mark Field's acclaimed first book, Between the Crashes, explored the economic collapse. Now, in his new collection of essays, the City of London MP charts our progress as the economy splutters back to life, untangling the rhetoric of deficit reduction from reality, and meaningful reform from political posture.

The Best of Times traces the compromises of coalition government and the emergence of a new anti-establishment sentiment, taking in the Scottish independence referendum, UKIP's rise and fall, and the unexpected genesis of Corbynism. Conflicts in the Middle East open a dark chapter in foreign affairs while, closer to home, a shock Conservative victory in the 2015 general election ensures a hotly debated EU referendum.

Yet, for all the surprises delivered by the past three years, today's challenges are deeply familiar: shifting global power, generational wars and disillusionment with capitalism still threaten our prosperity. Engaging and unflinching, The Best of Times offers erudite analysis and practical solutions to the challenges facing Britain today.

Between The Crashes
The Good, the Bad and the Greedy
The New Snobbery
Greater