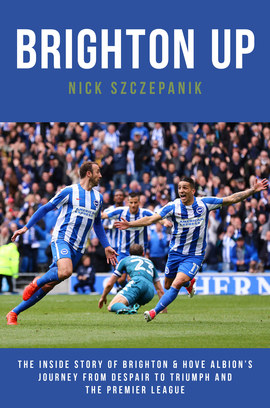 Brighton Up: The Inside Story of Brighton & Hove Albion's Journey From Despair to Triumph and the Premier League tells the story of how Brighton & Hove Albion Football Club bounced back from the heartbreak of missing out on promotion to the Premier League by the narrowest of margins, to achieve that ultimate goal earlier this month. Acclaimed sports journalist Nick Szczepanik, a lifelong Brighton fan with strong contacts at the club, documents its travails over two turbulent seasons.

The book explains how the Seagulls, written off as certainties for relegation to League One before the 2015–16 season, overcame the loss of one of their own in the Shoreham Air Show tragedy to go on a record unbeaten run. But although top scorers in the Championship, they fell agonisingly short of their target of automatic promotion by a single goal, then lost out again in the lottery of the play-offs.

The football world expected them to be crushed by disappointment and outspent by the big guns of Newcastle, Norwich and Aston Villa, but instead they regrouped and came back stronger in 2016–17.

Led by experienced and inscrutable manager Chris Hughton and backed by owner Tony Bloom – the world-class poker player nicknamed ‘The Lizard’ for his ice-cold blood – they played with a determination not to let the heartbreak happen again.

“As Albion fans, we’re excited and worried about being in the Premier League, but we had to get there first, so let’s indulge ourselves in the story of the glory. And here is how it happened, beautifully told, with all those behind-the-scenes opinions and details that most of us are not party to. For an Albion fan it’s a must-have.”

Journeyman
Nearly Reach the Sky
Get It On
Kicking Back