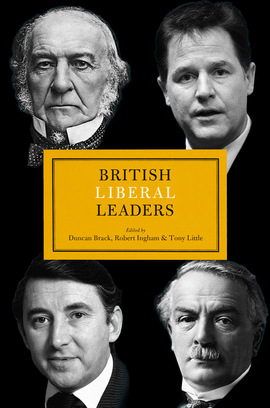 As the governing party of peace and reform, and then as the third party striving to keep the flame of freedom alive, the Liberal Party, the SDP and the Liberal Democrats have played an undoubtedly crucial role in the shaping of contemporary British society. And yet, the leaders who have stood at its helm – from Earl Grey to Nick Clegg, via William Gladstone, David Lloyd George and Paddy Ashdown – have steered the Liberal vessel with enormously varying degrees of success.

With the widening of the franchise, revolutionary changes to social values and the growing ubiquity of the media, the requirements, techniques and goals of Liberal leadership since the party’s origins in the struggle for the Great Reform Act have been forced to evolve almost beyond recognition – and not all its leaders have managed to keep up.

This comprehensive and enlightening book considers the attributes and achievements of each leader in the context of their respective time and political landscape, offering a compelling analytical framework by which they may be judged, detailed personal biographies from some of the leading academics and experts on Liberal history, and exclusive interviews with former leaders themselves.

An indispensable contribution to the study of party leadership, British Liberal Leaders is the essential guide to understanding British political history and governance through the prism of those who created it.

'The leaders profiled in this book led the Liberal Party, SDP and Liberal Democrats through the best of times and the worst of times. Some reformed the constitution, led the assault on privilege and laid the foundations of the modern welfare state. Others kept the flame of Liberalism burning when it was all but extinguished. I am humbled to follow in their footsteps and learn from their experiences.'

'Political leaders matter. They embody a party’s present, while also shaping its future. This is particularly important in the values-based Liberal tradition. The essays in this book provide a fascinating guide to what it took to be a Liberal leader across two centuries of tumultuous change.'

'The essays in this book shine a sharp light on the nature and history of political leadership in the Liberal Democrats and their forebears, and on how each leader has coped with the specific challenges facing them. This is an excellent, authoritative volume that can be warmly recommended for everyone with an interest in British politics.'