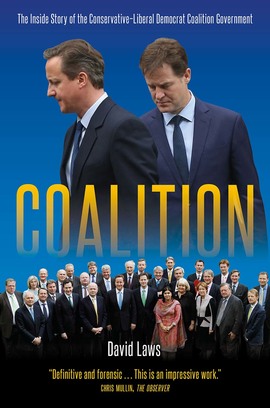 Coalition The Inside Story of the Conservative-Liberal Democrat Coalition Government

When David Cameron and Nick Clegg stepped out into the rose garden at No. 10 to launch the first coalition government since the Second World War, some doubted whether the coalition could survive a full term – or even a full year. Five years later, this bold departure for British politics had weathered storms, spending cuts and military strikes, rows, referendums and riots.

In this compelling insider account, David Laws lays bare the inner workings of the coalition government from its birth in 2010 to its demise in 2015. As a key figure at the heart of government, he witnessed first-hand the triumphs, the tantrums and the tactical manoeuvrings.

Now, he brings this experience to bear, revealing how crucial decisions were made and uncovering the often explosive divisions between and within the coalition parties. Honest, insightful and at times shocking, Coalition shines a powerful light on perhaps the most fascinating political partnership of modern times.

“There are few – even from within my own party – whose inside story of the 2010–15 coalition I would trust more than David Laws’s.”

“David Laws has written what deserves to become the definitive account of the 2010–15 coalition government. It is also a cracking good read: fast-paced, insightful and a must for all those interested in British politics.”

“These memoirs are terrific, everybody should read them.”

“Packed with remarkable verbatim accounts of the arguments between the men at the top: David Cameron, George Osborne and Nick Clegg.”

“This book makes the politics of coalition come alive. It is well written, with a great deal of humour and a nice eye for detail. […] This is an important work that goes a long way towards explaining our contemporary political predicament. I cannot recommend it too highly.”

“This is an impressive work. A lucid, engaging mix of anecdote and forensic detail, it has a fair claim to become, at least for the foreseeable future, the definitive account of the UK’s first postwar experiment in coalition government.”

“[Combines] almost unrestricted levels of access with his unparalleled attention to detail to produce a convincing account of a historic term in office.”

“Expectations were high for Laws’s account; fortunately, he not only meets them but surpasses them in almost every respect.”

“An honest, thorough and thoughtful account of  life at the heart of the last government.”