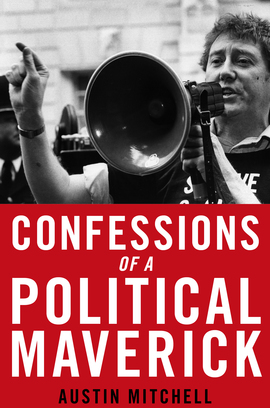 Confessions of a Political Maverick

Austin Mitchell is one of the original political mavericks. For thirty-eight years he was a fly in the parliamentary ointment, a recurring itch on the body politic: annoying the whips, threatening party discipline and challenging the solemnities of Parliament.

A career-long backbencher, Mitchell found he relished being in opposition. Dissenting from the peculiar conformity of career politicians climbing the greasy pole may have been a lonely job, but someone had to do it – and it was also a lot of fun. Here, he tells the story of how he waltzed into a seat in Labour’s heartlands, outlines his views on the controversial European question and explains his long (and torrid) love affair with the Labour Party.

Brimming with revealing details of his dealings with all the major political players from Thatcher to Cameron, and enlivened by hilarious anecdotes and a real fondness for his time in Grimsby, these are the political memoirs of a true parliamentary rebel – with a cause.

“I admire Austin Mitchell so much because he was one of the most independent parliamentarians of his epoch. Rather than slavishly following the party line, he consistently spoke up for the truth, and he genuinely represented his constituents. He is in the same tradition as Tam Dalyell and Tony Benn. This book has great value because it shows it is simultaneously possible to remain honourable and be a politician.”

“The path of the rebel isn’t easy in politics, but Austin Mitchell is a brave, independent-minded maverick of a type we need more of. I enjoyed his account of his campaigns and the travails of today’s backbenchers. You will too.”

“Austin Mitchell’s book Confessions of a Political Maverick is well worth a read. He was a political maverick and I enjoyed our partnership on the weekly TV show Target. I think his confession that he came to conclude that he should have stayed in New Zealand where he was a distinguished TV interviewer and commentator is right.”

“Parliament needs more independent-minded MPs who will fight for good causes. Austin Mitchell was one, and I enjoyed his account of the ups and downs of the job. Swimming against the tide can be tough but often needed if justice is to be secured and political principles adhered to.”

"The candour is what hits you most when reading Austin Mitchell’s memoirs. Some political autobiographies are written to set the record straight or inflate the writer’s own ego. Mr Mitchell’s is neither – it is a funny, endearing and at times heart-breaking account of the life of an MP who did it all his own way."

"Entertaining, thought-provoking and shrewd … Future historians will have it on their reading lists."

Revenge Of The Rich
Snakes and Ladders
No Excuses
Pandemic Diaries