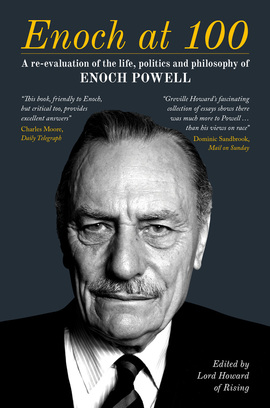 Enoch at 100 A Re-evaluation of the Life, Politics and Philosophy of Enoch

By Lord Howard of Rising

Racist or nationalist?
Loyal ally or ruthless opportunist?
The most influential man in post-war politics?

Enoch at 100 is a critical reassessment of Enoch Powell’s legacy by some of the leading political figures and writers of the current age. Originally released in the year of Enoch’s centenary, the contributions, from writers including Iain Duncan Smith, Frank Field, Simon Heffer, Andrew Roberts, Margaret Mountford and Roger Scruton, explore the enigma of a man who…

• Filled the House of Commons chamber during his speeches, and turned crowds away for lack of room when he spoke publicly.

• Electrified Parliament defending the rights of Kenyans, but delivered his infamous ‘Rivers of Blood’ speech a decade later.

• Was credited with winning one general election for the Conservatives, but losing another.

• Advocated radical de-nationalisation and propounded the benefits of a free market economy.

• Identified the problems of a single currency and warned of the political realities of the EU.

This book, friendly to Enoch, but critical too, provides excellent answers

Anyone who wishes to understand our tradition of parliamentary government should read this book.

Michael Forsyth’s elegant chapter on the constitution quotes Powell’s wonderfully cynical description of the true function of the House of Lords, for which it is almost worth the price of admission in itself… It is thought-provoking to read Enoch at 100 just after the Scottish referendum.

This collection of excellent essays paints a rather broader picture, of a politician driven by intellectual rigour and a clearly defined purpose.

This book goes a long way to explaining the enigma that was Enoch Powell.

[As] Greville Howard's fascinating collection of essays shows, there was much more to Powell...than his views on race

A superb set of essays.