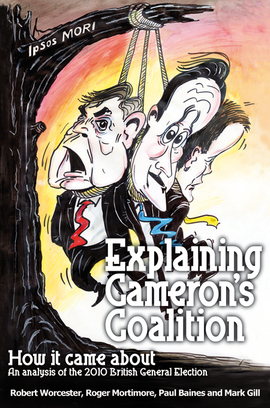 This book is no longer in print.

Explaining Cameron's Coalition is the first serious analysis of the May 2010 election, and the fourth in a series of books on British general elections to examine contests between the principal political parties from the standpoint not of the players the politicians and their closest observers, the media but from the people, for whom, after all, it s all about. This book differs from its three predecessors, Explaining Labour's Landslide (1997 General Election), Explaining Labour's Second Landslide (2001) and Explaining Labour's Landslip (2005), in that the outcome, a hung parliament with no political party having an overall majority, has radically altered the British political landscape. Written by expert authors and pollsters from MORI, it uses systematic and objective political research to explain the results and variations.

Packed with innovative tables and graphs, it is aimed at the general reader, political pundits and academics alike. Sir Robert Worcester, Roger Mortimore, Paul Baines and Mark Gill, from Britain s leading opinion research organisation, MORI, examine the results of the 2010 General Election using systematic and objective research to provide empirical evidence of what actually happened, and who were the winners and losers. Packed with tables and graphs, the book will delight political pundits, amateur psephologists and academic readers alike, as they seek to understand the results of a truly historical general election.

This is an excellent book... An essential source for anyone interested in the contribution of Liberals and Liberalism to British Politics.

My Hair Is Pink Under This Veil
First Lady
101 Ways to Win an Election
Trump: The Hidden Halo