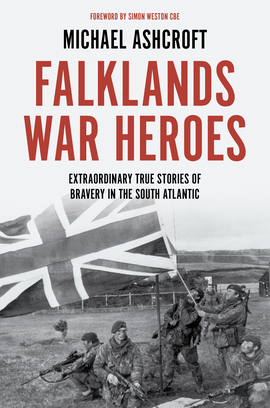 The Falklands War, which may prove to be the last ‘colonial’ war that Britain ever fights, took place in 1982. Fought 8,000 miles from home soil, it cost the lives of 255 British military personnel, with many more wounded, some seriously.

The war also witnessed many acts of outstanding courage by the UK Armed Forces after a strong Task Force was sent to regain the islands from the Argentine invaders. Soldiers, sailors and airmen risked, and in some cases gave, their lives for the freedom of 1,820 islanders.

Lord Ashcroft, who has been fascinated by bravery since he was a young boy, has amassed several medal collections over the past four decades, including the world’s largest collection of Victoria Crosses, Britain and the Commonwealth’s most prestigious gallantry award.

Falklands War Heroes tells the stories behind his collection of valour and service medals awarded for the Falklands War. The collection, almost certainly the largest of its kind in the world, spans all the major events of the war.

This book, which contains nearly forty individual write-ups, has been written to mark the fortieth anniversary of the war. It is Lord Ashcroft’s attempt to champion the outstanding bravery of our Armed Forces during an undeclared war that was fought and won over ten weeks in the most challenging conditions.